This is a beautiful area of bush in the Tararua Forest Park but it isn’t quite as close to Carterton as Google Maps makes it out to be! So the first thing to note is that from the SH2 turn off (approximately halfway between Greytown and Carterton) it’s about 17km with the last 6 or 7km being unsealed and narrow. There are some twists and turns but it’s not an especially windy road. It is a little tricky in places to pass oncoming cars. The road does however follow the beautiful Waiohine River and there are quite a few farm animals to lookout for. And the destination is well worth the effort! 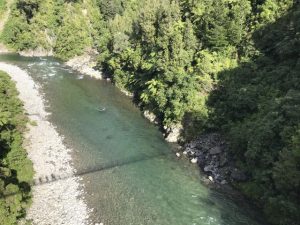 There’s a carpark at the end of the road and some signage although only currently a map showing the location of DOC huts in the Tararuas, no detailed map of the walking tracks. From the carpark, there are 2 tracks – the left hand side goes down to the river. We didn’t go down but it’s likely to be steep but worth the walk back up! The riverbank is stoney and there are some good swimming holes nearby.

The right hand path goes to the huge 124m swing bridge that crosses the river. If you have a fear of heights, it will be challenging to cross it! If you’re confident, it’s worth stopping midway and admiring the waterfalls, bush and water of the gorge. While heavy rain in the area can change the water quality, it’s often crystal clear and it feels like you’d be able to spot fish even from this great distance. The bridge is only a couple of hundred metres from the carpark. This and the river access might be enough for some families but if you’re after more of a walk, you will need to cross the bridge! 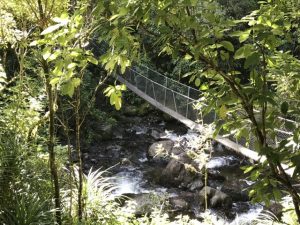 Once on the other side, the track goes left or right. We went right towards Totara Flats Hut (a 3 – 4 hour walk depending on speed). If there’s been heavy rain, it’s incredibly muddy and while there are a couple of board walks early on, it could still be worth wearing gumboots. There are also some creeks to cross. The path goes through reasonably thick bush with Totara and Rata trees both present if you look up. There’s a good amount of native bird life that you could have kids listen for. It’s reasonably flat but has lots of tree roots (very slippy if it’s been raining). A good destination to aim for if you’re not going to a hut, would be the next swing bridge which crosses a creek that you can access either to take a dip or enjoy something to eat as you sit on a big boulder. This walk should take about an hour in each direction from the carpark but it will depend on the speed of your group and the conditions of the track. It’s not suitable for buggies but dogs on a lead are allowed.

The grassy area near the carpark is a DOC camping ground which operates on a first come, first in basis. There are toilets for everyone to use (campers and general public) next to the carpark.

Take all your food and drink with you.

Address: end of the Waiohine Gorge Road the turn off for which is halfway between Carterton and Greytown. The road is subject to the weather as slips can close sections of it after heavy rain. There’s a carpark at the end of the road and toilets.